With an idle hour or two between teaching and meeting a friend at St Pancras I found myself wandering down to Somerset House, drawn by the lure of coffee at Fernandez&Wells and art at the Courtauld. Walking through Lincoln’s Inn fields I noticed that for once there was barely a queue outside the Soane Museum. Serendipity is a good thing. I had an exactly Soane-sized hole in my afternoon.

The last time I went to the Soane it was for an evening function with the whole museum lit by candlelight. This time, it being a public day, it wasn’t quite so atmospheric but nevertheless low lighting within and a gloomy afternoon without meant that the Soane’s peculiarly crepuscular feel was undiminished. The peculiar light, and the classical nature of the bits and pieces that scatter the rooms, put me in mind of the Rothko room at Tate Modern. They share a sombreness that silences even the squawkiest of visitors.

But it is. While his museum feels sombre it is clear that Soane had a sense of humour, which is particularly apparent in his Gothick Monk’s Room in the basement. Photography isn’t allowed so I can’t SHOW the uninitiated what treasures lie within but only describe a very personal selection of highlights, some of which will have universal appeal and some of which may be peculiar to me. The Soane is that kind of museum. It’s a collection that the architect himself developed over years, adapting the building to accommodate new acquisitions and to record tragic events in his own family (the death of his wife, his eldest son’s early death from TB and his younger son’s wastrel ways), as well as his friendship with some of the great figures of the Georgian age.

As I said,  the most apparent parts of the collection are the architectural features, some original and some plaster casts, that are spread throughout the building. It’s worth getting into all the nooks and crannies (and the whole house is a feast of n’s and c’s) to find your favourite. Amidst this plethora of classical works it is easy to forget that the museum is also one of the great art collections of London. Hogarth features highly (An Election Entertainment being my favourite) but on this occasion it was two works by the British Indian painter Hodges of Agra and Futtypoor that caught my eye.*

Of the collection of Great Man Memorabilia the two things that stood out were a maquette of Pitt’s statue in Westminster Abbey and a beautiful little miniature of a young Napoleon. Not in the same room alas but nevertheless a nice juxtaposition in the mind. And Walpole’s desk, which proves to be the desk of a midget.

The last item that I’ll mention was a model and painting of Soane’s design for his wife’s mausoleum. She died young and as Queen Victoria half a century later blamed the rakish Prince of Wales for her husband’s death, he also blamed the death on his son and failed to come to terms with her loss. The painting of the tomb showed it with that of Rousseau in the background in the idyllic setting of Ermenonville.

The reality of the tomb’s site is somewhat less Arcadian. On leaving the museum I walked up to St Pancras, where the tomb is to be found in the churchyard of the old church. The church is somewhat Soanesian in its eclectic amalgam of styles.

The church is out the back of St Pancras station on the way to Camden. As you walk north past the shiny new station, British Library and Crick Institute a bit of old London that I’m sure Soane would have approved of is clinging on for dear life.

Then to the tomb itself. It looks a bit mournful (well, I suppose it is a tomb!), not to say neglected. At first this made me sad, that an object whose design Soane had taken so much care over should end up bedraggled in a grotty corner of North London. The contrast with the hyper curated and cared for space of the museum could hardly be greater. But then thinking over his love for Rousseau and his own sense of the Gothick I reflected that maybe he wouldn’t be so concerned that the tomb has been left in a state of nature, to decay over time and add to the melancholy romance of his wife’s early demise. 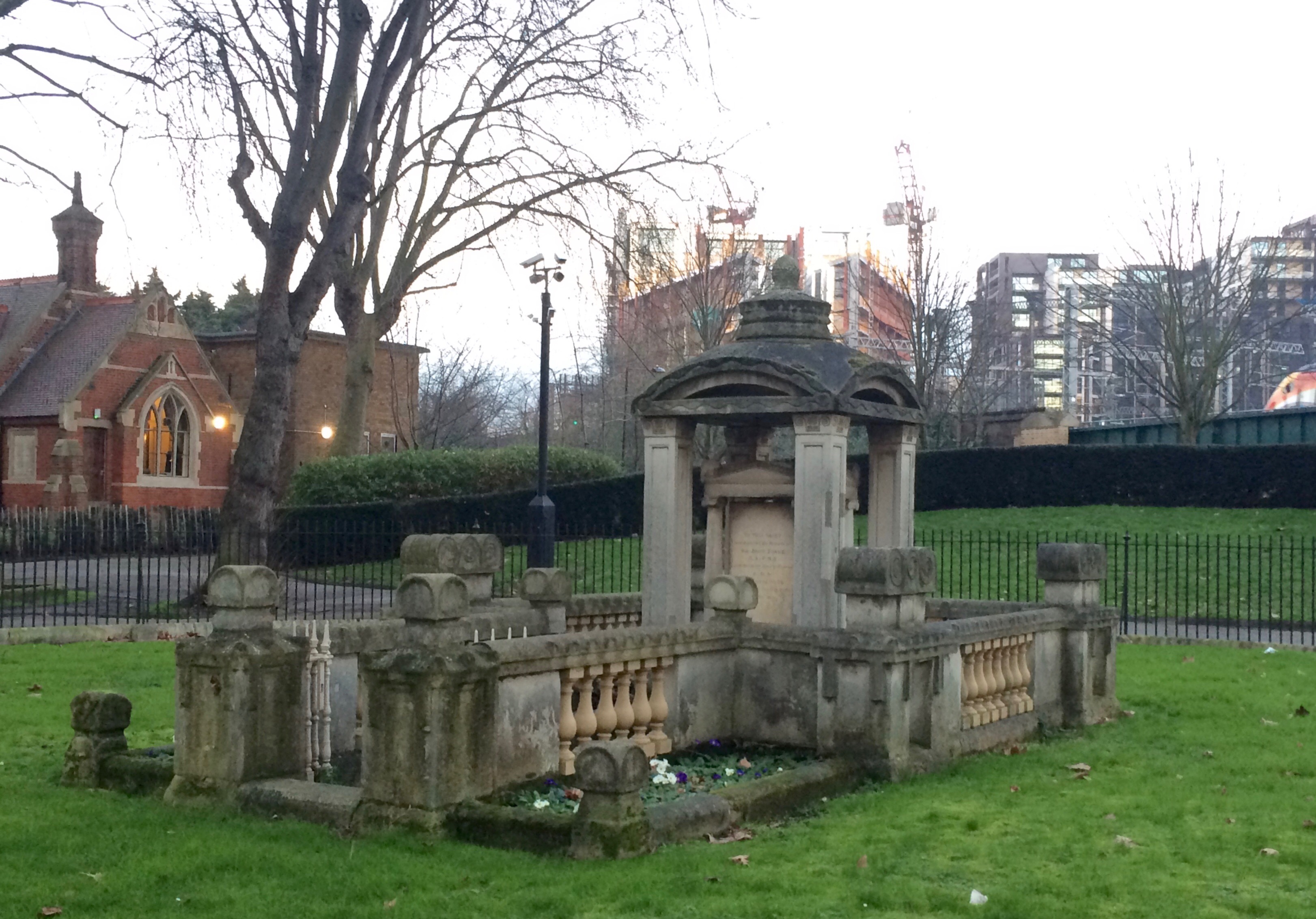 So I would urge a visit to the museum and then a brisk 20 minute walk to the churchyard. The museum is free but numbers are limited, so be prepared to queue. You won’t regret it.

* Hodges’ work features heavily in the Artist and Empire exhibition at Tate Britain, which I hope to blog on soon. It’s a good exhibition but has its flaws. Another highlight of the collection of paintings is Soane’s own portrait by Thomas Lawrence (who I’d commission to do my own portrait if he were still available – his depiction of Castlereagh makes a Byronic hero of someone that Byron himself loathed. A masterstroke of irony to the arch exponent of the gap yah).