Delft, mansplaining and bitterboellen at the de Hooch exhibition. Oh, and excellent beer. A good place to duck out of the rain.

Good food followed by an hour of Trotskyite propaganda delivered with all the charm of a carriage full of soccer hooligans beating up your grandma.

The food was good but at 30 quid a head we were paying too much for what was on affer. 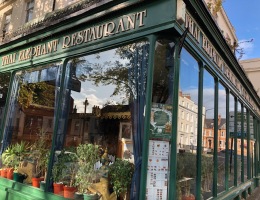 A white Rioja has enough beef to brighten up my conference pasted consciousness and we have a jolly enough time for £20 a head. Thanks Joe. 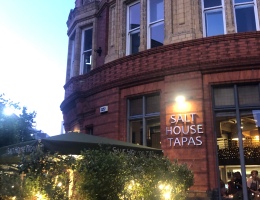 Kudos to the guy in the Uruguayan rugby shirt for surprise outfit of the day.

Enough savagery. The Chablis was excellent, as was the service. In fact Glasgow sets a high standard for service in the UK, from King Tut's to the Cathedral front of house was professional to the core.

Having watched Granit Xhaka and his inept chums only just fail to sabotage a fine attacking display by Arsenal's front five in a lunchtime kick off by the time we'd reached the food part of our post-match festivities in Winchmore Hill stomachs were empty but we were bonhomie full.