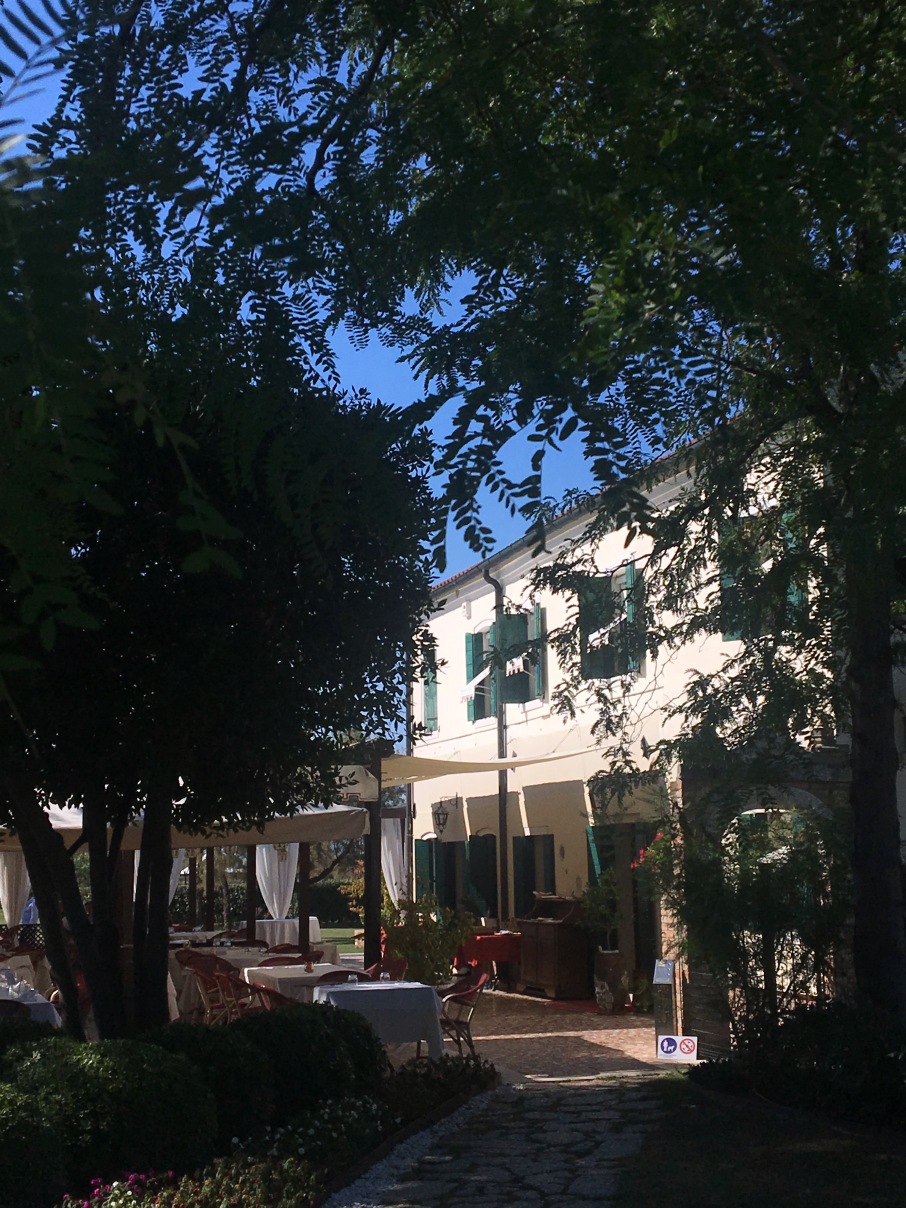 We were in Torcello on the recommendation of a friend to see the churches. Torcello Cathedral, pictured below, is quite easily the greatest work of art that I saw during our stay in Venice. Outside it’s a great barn of a thing that is an extraordinary sight in modern times as you approach the island. Imagine what impact it would have had in the eleventh century.

If you think the outside is extraordinary wait till you go through the door (sadly something that few tourists manage owing to the extortionate 5 euros entry fee.). Above the door a three storey high mosaic of the Day of Judgement, complete with a bonk eyed devil ordering the consumption of identifiable rotters by various fabulous beasts and demons while the saved polish their nails on the other side and go, ‘Good riddance.’ Above the altar Christ in Majesty and the Apostles and Saints ranged in equally spectacular glory. Utterly breathtaking. And then a troop up the bell tower for a great vista of the Venetian marshes which gives you a perspective on the isolation of the founding community when it came here in the (not so) Dark Ages. All that culture made me hungrythirsty.

My friend had also recommended a restaurant, the Locanda, but it was shut owing to it being Assumption Day. Fortunately Villa 600 was open across the way and although they seemed reluctant to take on extra diners at first (I’m guessing the staff wanted to get along to the festival at some point, we’d seen a bunch of musicians arriving all day on the boat) the waiter kindly gave us a splendidly appointed table in their shady garden. The rest of the clientèle was mostly Italian, a good sign.

We four ate like kings. First up we shared a mixed seafood antipasti. When we ordered one only he did seem a little crestfallen and when it arrived we found out why. A prawn, no matter how king-sized it is, is not easily quartered. We should have got a couple of platters. However, we managed, and sloshed a bottle of Pinot Grigio as we did so.

For main the turbot was a magnificent thing, a big chunk of fishmeat cooked to perfection with courgette crisped and a bean sauce. Nay stodge but we were loading on bread so that was okay. The mixed salad was a dress your own affair and all the better for that. I sprinkled a bit of balsamic, olive oil and pepper on that and it was good.

A second bottle was near termination by now and we were in an expansive mood. Yes, we would like dessert, we very much would. Sorbets with liqueur seemed a winner. I plumped for the pistachio. It was like the ice cream soup of your dreams, staring up at me like a crocodile’s eye. I wanted to linger over it but it tasted too good, I wolfed it down greedily.

By this point I was glad I’d been for a run in the morning. Coffee next. Proper espresso. And what about grappa? When the waiter said they had two kinds of home made grappa it seemed rude not to take an option on both of them so we did that. One was golden and slightly briny, smooth like a real tequila. The other was white and flavoured with rosemary from their own herb garden. I supped and tried to decide which was the better. They were both good.

It was a treat, and at €50 a head objectively it wasn’t cheap. But it was the kind of meal that was not just a highlight of this holiday but of holidays for years to come and I didn’t begrudge giving a decent tip. We got back on the boat to visit the hell that is Burano before making an inspired decision to decamp to Mazzorbo for a glass of wine at the Venissa Ristorante. Also recommended. Go to Torcello, it really is worth the hour long boat ride.