The picture at the head of this piece is of a postcard I brought back from Paris, it must be ten years ago. A self-portrait by Eugène Delacroix, a man well aware of his own dudosity. So what joy it is that there should be such a fantastic show at the National Gallery not only celebrating the man’s work but also his role as the inspiration to the next generation of painters. Men (for the most part alas) whose celebrity outstrips his own in contemporary times. It’s good to have him placed front and centre, for another month at least, in what is a wonderful show.

What perplexed me was that although Delacroix’s diaries are referred to in both the catalogue and the labels there isn’t a copy on sale in the NG shop – surely an opportunity has been missed! The reason I was looking for a new copy was that I had mislaid my pocket-sized edition published by Phaidon, one of a series of written classic works by artists and writers of which I have tried to obtain a full set.* Well, they had plenty of stuff by other people but nothing by the lad himself. A shame.

I won’t describe at length the wonders within the exhibition as there’s still plenty of time for people to go and look for themselves. But I will pick out a plum that explains why it is a must-see thing. One of my favourite pieces of Delacroix’s is that of Christ Sleeping During the Storm. To my mind it works as a metaphor for stoicism – the apostles fret, the storm rages, land is in sight, Christ takes a nap. Patience and faith (which work for both the secular and religious among us I think) are the keys to wending a way through the storms of life.

It’s a painting I’ve seen in the NG before but the difference as it is hung now is that it’s shown beside a Redon of a similar subject. Redon is an artist with whom I’m relatively unfamiliar and what I’ve seen of his hasn’t particularly appealed – that hot, over hot, splurge of sexual-psychological anxiety associated with the fin de siècle is not to my taste. But with his response to Delacroix he kind of clicked for me.

Redon removes the tempestuous drama that Delacroix the romantic puts into his composition and makes the scene more transcendental. Nature for Redon is not threatening the sailors. Neither is God. It’s the bare unforgiving sun in the sky and the isolation of the boat, the loneliness of the scene that come across. No land in sight, a ship cast adrift under a godless sky. It shows the shift from a Romantic to a modern sensibility.  From an appreciation of the beauty and danger of nature, and of human nature, to a turning inward of the mind. And each of the works is beautiful. It’s not the only time this kind of juxtaposition works in the show, it happens time and time again.

But there are two things that I would say that you don’t get from the show but that do become apparent from a trip to Paris.

The Delaxroix Museum comes as part of a ticket for the Louvre and is well worth visiting as a warm up act for the main event.

The house is where Delacroix lived and worked in Paris with a beautiful little garden laid out as he would have had it. 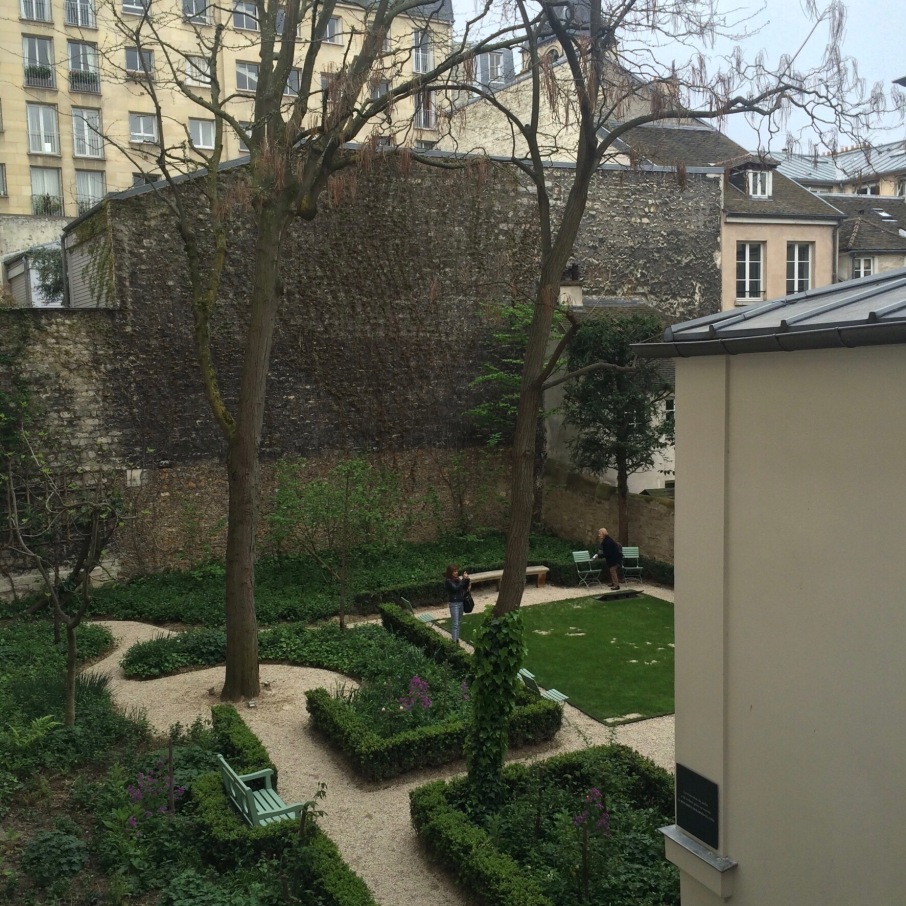 Perfect for a pause in a busy day. I was interested by a display about Delacroix’s time in London. I hadn’t realised that he’d been to England (to my embarrassment, what kind of a London guide am I?). It had always puzzled me as to why his house was decorated with a replica of a Lapith v Centaur duel from the Parthenon Sculptures at the BM. Now I knew. Delacroix visited the British Museum in the company of his English friend, Thales Fielding.** The NG exhibition goes to town (rightly) on how significant Delacroix’s visit to Morocco was for his art but curiously for a British institution omits any lengthy reference to the impact of London on his art. Which is a shame. 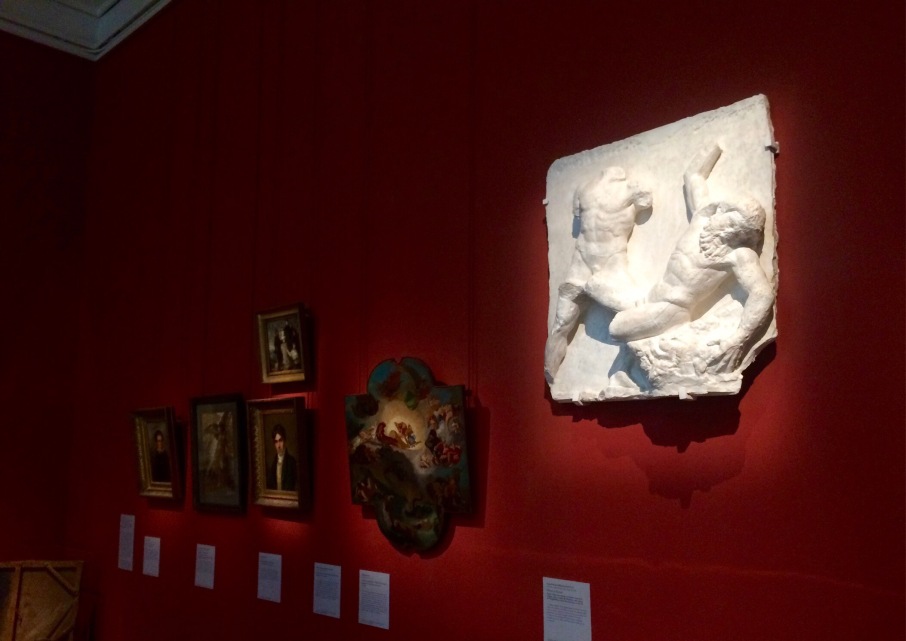 In the Musée D they have a couple of beautiful watercolours done by the artist of tombs in Westminster Abbey. In the picture above you can see the replica of the BM panel and to the left the portraits of one another that Fielding and Delacroix made during his stay in London. It’s a joy to visit the studio as it shows you the intimate side of Delacroix that comes across in prose in his diary but which is missing both from the NG show and from the place that we went to next, the Louvre.

In the Louvre you have the big beasts. Sardanapalus, The Massacre at Chios, Les Femmes d’Alger. At the NG they have sketches and versions of these canvases but it’s not quite like seeing the real thing. Especially Sardanapalus which is a twisted mash up of sex, violence and soft furnishings. And of course then there’s Liberty Leading the People.*** Not even a sketch of this in London. And you do have to see it because in the flesh it is breathtaking and Important with a capital ‘I’ like no other painting of the nineteenth century. Politically revolutionary from an artist who otherwise I don’t see as overtly political.

And this is missing from the NG’s thesis in London. Yes, Delacroix hands on a new sense of nature to Monet and Renoir, orientalism to Bazille and the rest but I wanted the politics that Manet picks up and makes such a big part of his work. Doesn’t Liberty have as a descendant the National’s own Emperor Maximilian?

So go to the National for flowers, North Africa, nature and God. But then, if you’re lucky enough to have the time and the means, go to the Louvre for the politics.

And Murat. I don’t normally take photographs of paintings but I just couldn’t resist Joachim Murat in peach jodhpurs atop a tiger-skin saddle.

* Yes, I know that’s what the internet is for! But if I’m buying for pleasure and not for work I prefer to go book-hunting myself and use serendipity as my guide. So after leaving the NG the first time I went to see Delacroix I first ransacked all the bookshops in Piccaddilly – ooh, isn’t there a Phaidon shop ON Piccadilly? No, of course not, that shut years ago. Then up Charing Cross Road, no luck. Up to Bloomsbury for a last chuck of the dice in Skoob and Judd Street. But then I thought of the second hand section in Waterstone’s Gower Street and (marvels!) not only did they have the book they had it in a fat French edition (£15) by Plon that is just a thing of wonder (‘un monument unique’ it says on the back and they’re not wrong). I plan to progress in a stately fashion through its pages but also ransack it at random for quotes about various shit that I’m interested in, and paintings/artists too.

** I read a column in The Spectator last week bemoaning outlandish modern names. As if this shit hasn’t been going on for years. I mean, Thales?!

*** There’s a really good In Our Time podcast on it on the BBC, well worth tracking down.