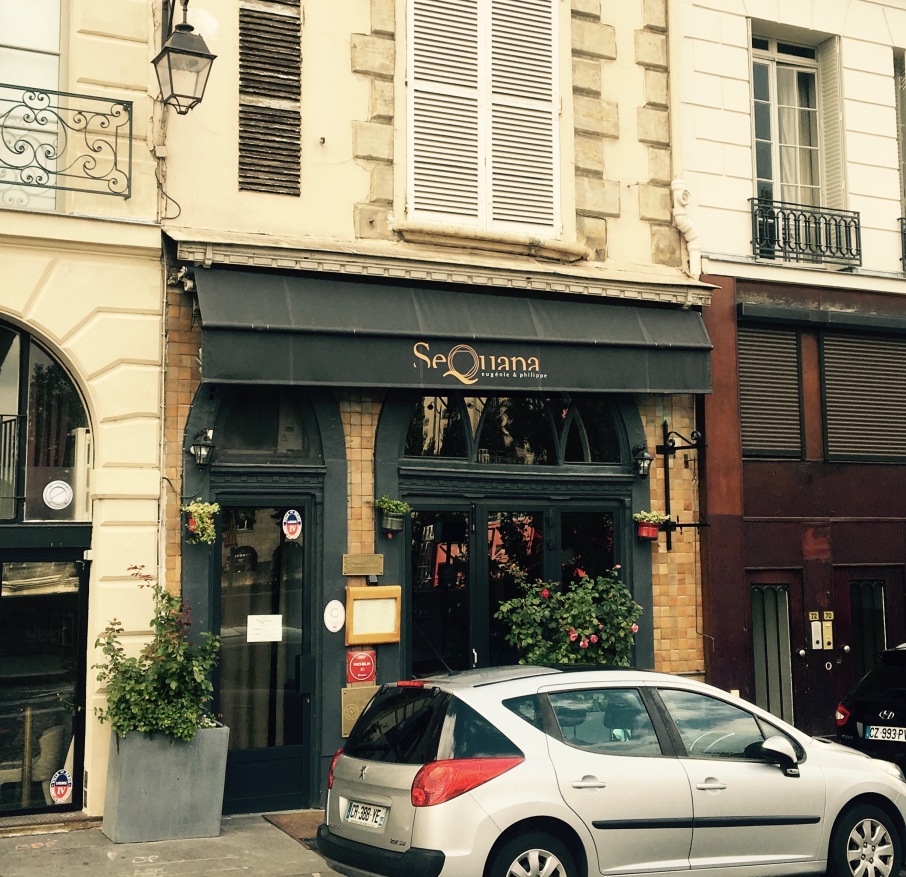 I’d booked Sequana in advance on the basis of it’s location by the Pont Neuf and after reading excellent reviews on G**gle. It’s run by a husband and wife team who produce a six or four course tasting menu with matching wines for a very reasonable number of Euros per head for this area of Paris.

The room is charming although those of a nervous disposition might take the spiral stairs to the jakes at the beginning of the evening rather than after four glasses of wine. We were dining in the company of a smattering of tourists from around the world of many different ages. I liked it, it felt convivial.

Before we commenced the four courses we were given an amuse bouche of radish by the chef, which was a nice palate cleanser to begin. Then the main event. I chose the lobster starter and I chose well. A delicious claw of the crustacean swimming in a sweet soup with delicate pieces of courgette and fresh leaves dotted around. Forgive me if I don’t mention all of the wines (we had three), it’s not because they weren’t excellent that I can’t remember them, it’s just that I don’t remember them!

Next up was duck done two ways. Making it a double duck day, no bad thing. This was also excellent with confit canard hiding under slivers of grilled breast. Alongside there was plenty of veg and everything served with a delicious home made sour dough bread. Course three was the cheese. But a rather surprising combination of a yummy sheep cheese alongside a goat’s cheese ice cream. I have to say I was less impressed with the ice cream, which to my tongue tasted mostly of salt and lacked the punchy whiff of the goat. We considered getting a goat for the garden.

This goat blot was erased by the excellence of the Ardbeg ice cream which rounded off the meal. Served with a Basque pastry it was the most delicious ice cream I have ever had bar none. Smokey and sweet and just perfect. With the dessert came a Chinese tea which I really wished would turn itself by the power of my mind into a Grand Marnier. I stared at it but it resolutely refused to become a big goblet full of orange and ice. Oh well, I sipped my tea.

Our maitre d’/waiter (husband of the chef I think) was very attentive and clearly passionate about the food, much of which had been grown in their own garden. This passion and care for the food clearly came through in the cooking and in the way that the wine complemented each course. However, this is a slow food evening, if you book here you aren’t going to make it to the theatre afterwards. But it being August everything cultural (barring museums/galleries/cinemas) in Paris was off to festivals so we weren’t in a hurry to go anywhere else. Although the Dutch guys to our left who chose the six course option were still munching when we left at eleven.