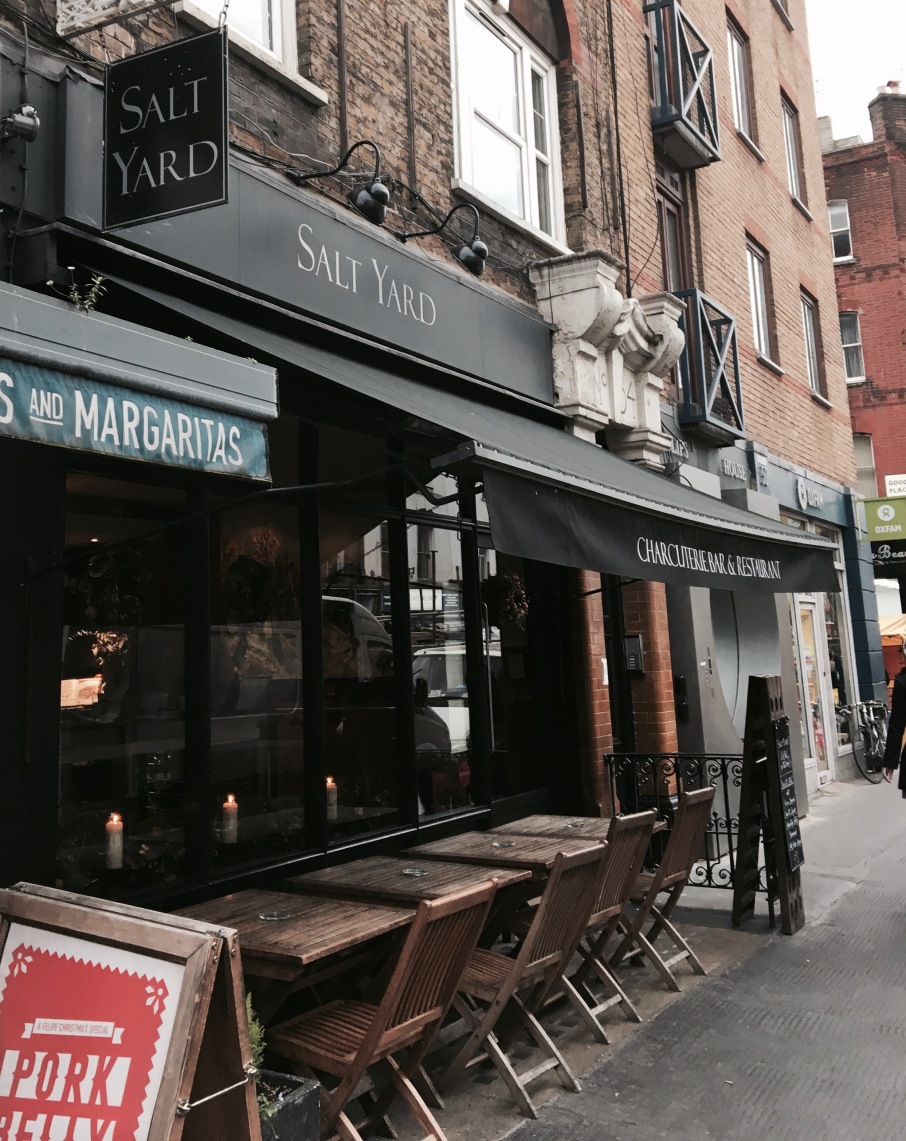 Back in the smoke to catch up with a Nippon bound friend we arranged to meet at Salt Yard, an old favourite. I was on the back of prepping a Fitzrovia walk and having memorised a range of anecdotes of thirsty thirties Fitzrovians I was definitely in the mood for food.

In a bid to squeeze in a cheeky sherry (it’s nearly Christmas after all) and do the crossword I got there early. And so did he, so the crossword had to wait for later and we both supped a sherry while we looked at the menu.

And what a menu. I could pretty much eat anything on it. Except for the risotto which was billed as arriving with a duck egg.* So we took an intro of thin, raw meat and then two from the top, two from the middle and one from the bottom please Carol (showing my age), along with a bottle of white from Puglia.

The room filled up rapidly and as a large office party was slotted in downstairs I feared that the kitchen might be put under pressure. I couldn’t be more wrong. Our tapas arrived on a smooth conveyor belt of punctuality.

The meat – thinly sliced pieces of pig flavoured with marjoram and chilli – were an excellent way to start. Then, Dylan Thomas style, we took the sweet stuff first; soft cheese-stuffed courgette flowers drizzled in honey. V good. Then the main event – chicken, more oink, squid ink croquettes. The pig was a hefty cube of braised belly and just melted in the mouth. Chicken arrived prettily arranged in a  bowl alongside the subtlest aioli I’ve ever had. The croquettes were served I’m A Celebrity style as a row of four crocadilly-like eyeballs, which was slightly disconcerting but delivered on flavour and texture if not looks.

I’d eaten well but I still wanted more so we got some manchego to go with the dregs of the booze before getting a beautiful espresso served in a good deep cup. The deep cup is very good for holding in warmth and aroma isn’t it? With the service charming and discreet it was one of those days where I could have just remained seated for the whole afternoon with a glass of something sticky and then done it all again for my tea. Salt Yard isn’t cheap but you do get value for money.

*I still harbour a deep resentment towards M. P. White for once delivering an un-menu’d egg to me at The Criterion on top of some guff or other that I shouldn’t have ordered.