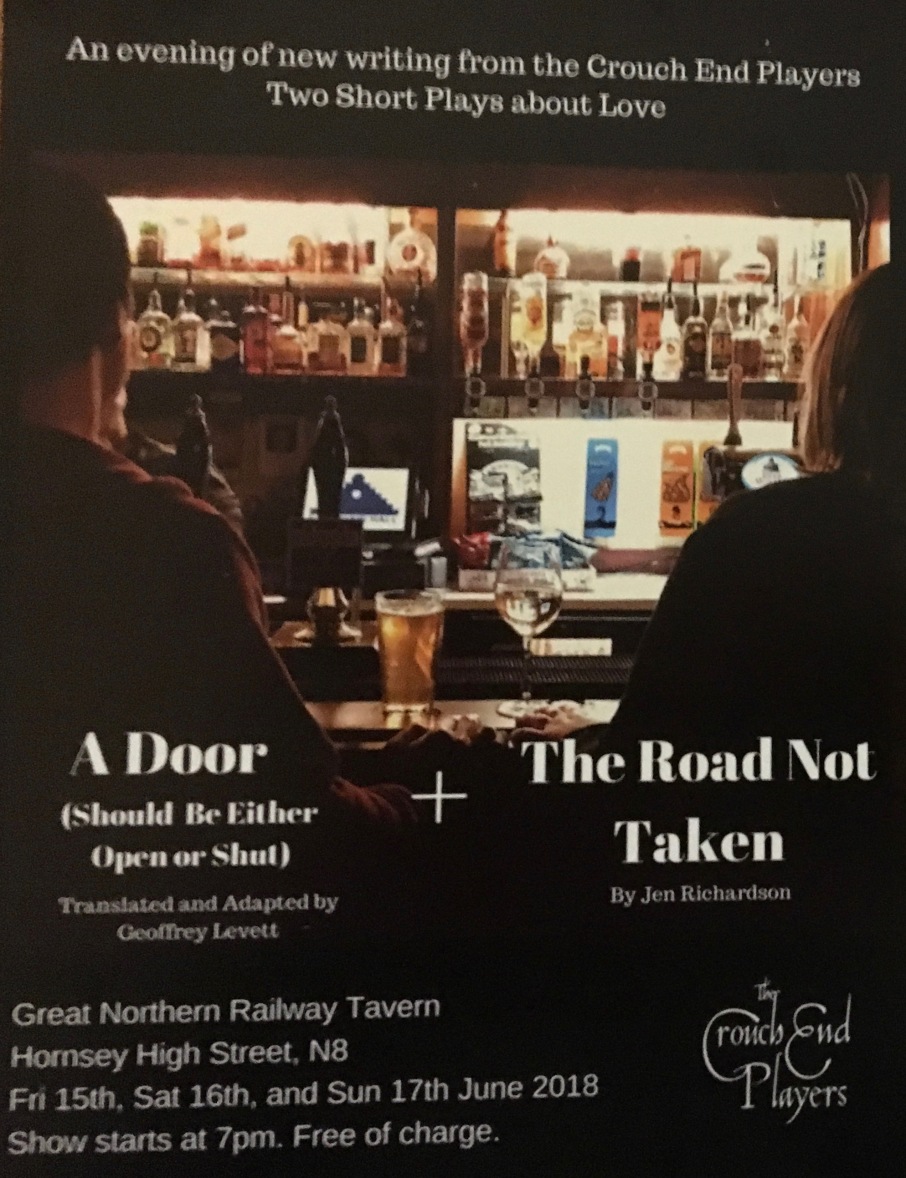 After having had a pretty good experience producing Corbyn Island in 2017 I found myself in the dull gloom of January turning over ideas for the Crouch End Festival in 2018. Again, it being a Festival piece, I wanted something relatively short and preferably fewer characters than the Island. If I was going to be directing it myself (a new experience) I thought it’d be a lot easier with less traffic to manoeuvre on stage.

I’d seen a production of Alfred de Musset’s Il Faut Qu’une Porte Soit Ouverte ou Fermée in Paris the previous autumn in a production by the Comédie Française. A one act two-hander, it concerned itself with an on-off relationship between two French aristocrats at a Parisian salon in the 1840s. The CF had updated it to contemporary France, setting the actor in a sculptor’s studio, while retaining (naturellement!) the original language of Musset’s masterpiece.

Further research revealed that de Musset hadn’t written the piece with the intention of staging it at all – rather it was theatre de fauteuil, that is ‘armchair theatre’ written to be read as a literary piece like a novel or a short story. But it had become established as a classic of the French theatrical repertoire by the end of the twentieth century, produced every year by the Comédie Française to the extent that it was part of the social calendar in the early twentieth century.

However, post-World War Two it was performed much less frequently. Presumably the market for rom coms about brittle aristocrats was in decline in the age of Camus, the theatre of the absurd and existentialism. In fact I beleive that the production that we saw was the first at the Comédie Française for some forty years.

So my challenge was how to make it relevant to a Crouch End Festival audience. My initial instinct was to make the couple same sex but to wangle Musset’s text into the correct shape to do that proved beyond my translation abilities. I gave it a few hours of grappling on the commute to Leicester and then gave up.

I then toyed with the idea of just translating de Musset’s original and staging it as a work of art. I would designate a chair in the Great Northern for people to read a printed translation of the play which they could borrow from the bar. But then if I was going to the trouble of translating the play (a much simpler business than tackling Marivaux, though with the peril of ruining the exquisite poetry of de Musset’s language) I did rather see it acted out.

So I needed to find some other way to create tension in the potential pairing (or not) of these two characters. And I think I came up with a good solution. But to find out what that solution was you’ll have to come along to the show!

But I can tell you that I updated the action to 1948 London, with the characters now meeting in a private club on a wet Sunday afternoon.* I’ve added a third character of a barman, played by Ruari Johnson. The female lead is taken by the director of Corbyn Island, Anna Rogers, and a newcomer, Matt Griffin, takes on the role of her suitor.

This year we’re producing the show as part of the Crouch End Players’ contribution to the Festival with our show running with an original piece of writing by Jen Richardson, The Road Not Taken, as part of a rom-com double bill. Running time will be around an hour in total with a break for drinks.

Performances are again in the upstairs bar of the Great Northern Railway Tavern, who have once more proved to be excellent hosts, and take place on 15th, 16th and 17th June 2018 at 7pm and tickets (which are FREE!) can be obtained by emailing crouchendplayers@hotmail.com. More details are also available at the Festival website.

It’ll be the perfect evening out for World Cup widows and widowers but if you are a football fan don’t worry, the Great Northern will have the games on the big screen in their back garden and the shows are timed to make sure that you miss very little of the action from Neymar and his chums!

*Yes, I know this has shades of Absolute Hell! But our production has an entirely different sensibility.